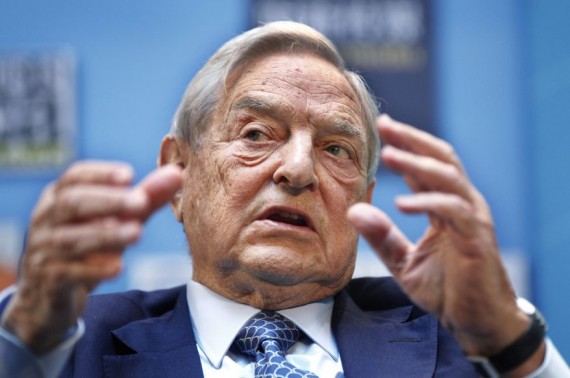 “The Bush administration is actively supporting the Israeli government in its refusal to recognize a Palestinian unity government that includes Hamas, which the US State Department considers a terrorist organization. This precludes any progress toward a peace settlement at a time when progress on the Palestinian problem could help avert a conflagration in the greater Middle East.”

Demonstrators march on Pennsylvania Avenue toward Capitol Hill in Washington, Saturday, Dec. 13, 2014, during the Justice for All march. More than 10,000 protesters are converging on Washington in an effort to bring attention to the deaths of unarmed black men at the hands of police. Civil rights organizations are holding a march to the Capitol on Saturday with the families of Michael Brown and Eric Garner, two unarmed black men who died in incidents with white police officers. (AP Photo/Jose Luis Magana)

Soros Provides Pressure From Above, Below

Billionaire Big Government-partisan and Obama administration ally George Soros (shown) provided at least $33 million in a single year to radical leftist groups orchestrating protests and unrest in Ferguson, Missouri, and nationwide, according to an explosive investigation into filings of the globalist financier’s tax-exempt “Open Society” foundations. Dozens of Soros-funded outfits helped lobby the media, bus in AstroTurf protesters and “community organizers,” coordinate propaganda messaging, create an “echo chamber,” and more, theWashington Times revealed. In other words, Soros, a key globalist establishment figure, was helping to provide pressure from above, and pressure from below, in the war on local police. Based on the establishment media’s non-stop parroting of the Soros-funded propaganda, the relative success of the strategy was plain to see.

Despite the recent uproar over Soros’ giant role in exploiting Ferguson and bankrolling nationwide anti-local police machinations, it is hardly the first time that Soros, a protégé of the Rothschild banking dynasty, has faced scrutiny over his pseudo-charitable activities. In fact, as The New American has documented extensively, varied efforts have benefited from the powerful hedge-fund boss’ largess, including the anti-market Occupy Wall Street “movement,” the Obama election campaign, and deadly revolutions overseas.

In Ferguson and beyond, though, the influence of Soros’ billions was felt close to home by millions of Americans. “There’s a solitary man at the financial center of the Ferguson protest movement,” reported the Times’ Kelly Riddell, citing financial records and interviews with key players about the Soros role in fueling the manufactured chaos that engulfed Ferguson. “No, it’s not victim Michael Brown or Officer Darren Wilson. It’s not even the Rev. Al Sharpton, despite his ubiquitous campaign on TV and the streets. Rather, it’s liberal billionaire George Soros, who has built a business empire that dominates across the ocean in Europe while forging a political machine powered by nonprofit foundations that impacts American politics and policy.”

According to the Times story, which garnered headlines worldwide, Soros’ organizations helped mobilize demonstrators and build up “coalitions” — oftentimes coalitions of his own AstroTurf outfits — to drum up hysteria.  Some Soros groups developed dubious “academic research” and generated editorials that the establishment press was only too happy to promote and parrot. The Soros-funded organizations “fed off each other,” the Times reported, creating what the paper described as an “echo chamber” within social media and the mischaracterized “mainstream” press. Even some of the media outlets hyping the Soros-funded “grassroots” schemes are funded by Soros.

Among the radical Soros organizations that descended on Ferguson and participated in the scheming were the Samuel Dewitt Proctor Conference in Chicago, the Drug Policy Alliance, Make the Road New York, Equal Justice USA, Sojourners, the Advancement Project, the Center for Community Change, and networks from the Gamaliel Foundation. “All were aimed at keeping the media’s attention on the city and to widen the scope of the incident to focus on interrelated causes — not just the overpolicing and racial discrimination narratives that were highlighted by the news media in August,” the Times reported about the activities of the collection of Soros-funded groups, including more than a few race hatemongers and pseudo-religious outfits with strong ties to the Obama administration.

More than a few critics have referred to Soros’ operatives as “racist hate groups.” In one column lambasting admitted National Socialist (Nazi) collaborator Soros as “evil,” for example, the billionaire financier’s activities were described as “paying racist leftists to block roads and harass you.” Columnist Daniel Greenfield also suggested that Ferguson victims of Soros-linked rioting, looting, and violence ought to send the bill to the prominent hedge-fund boss. Ben Bullard at Personal Liberty Digest, meanwhile, noted that, by the end of the Times report, “‘echo chamber’ begins to seem an inadequate description for a coterie of groups that occupy such a claustrophobic ideological, organizational and financial space.”

Still, despite Soros’ giant footprint in Ferguson, the widely criticized billionaire was not entirely alone in fomenting the unrest — his establishment allies and other powerful forces helped too. As our article "Are Local Police to Blame?" points out, the Ford Foundation, Tides Foundation, and other radical tax-exempt “philanthropies” have poured millions of dollars into the activist groups, encouraging the riots and discord.

Amid ongoing anti-police protests in New York and across the nation, analysts dug up a 2010 news story that reported on another Soros funding angle that might have also played a role in building up the “movement” behind the riots. Five years ago, New York schools introduced what was dubbed a “human rights curriculum” for middle- and high-school students. In addition to hyping controversial UN notions of “human rights,” the scheme focused heavily on the anti-police work and initiatives of self-described communist revolutionary and Soros beneficiary Van Jones — the radical who served as Obama’s “green jobs” czar until his extremist revolutionary background was exposed by the conservative press.

The Obama administration, which benefited from millions of Soros dollars on the campaign trail, was also important — with top officials, including Obama, irresponsibly meddling in and commenting on a local issue with a view to fomenting racial strife. The Justice Department, meanwhile, was recently exposed for having provided grants to a leftist “community” organization that was involved in producing a rap music video glorifying and encouraging the murder of police officers. The outfit, dubbed “Bronx Defenders,” has received at least $1.5 million in U.S. taxpayer dollars from Obama’s Department of Justice, and more than $100 million from New York taxpayers since 2007!

Obama’s “Organizing for Action” outfit is currently involved in training 10,000 “progressive community organizers” to fan out across America and transform the nation. According to the Washington Post, OFA “was designed to essentially be the Obama presidential campaign, made eternal.” As a 501(c)(4) “social welfare” nonprofit, OFA has taken in millions of dollars for use in political lobbying and organizing, much of it from Soros. Meanwhile, Obama and his allies in the establishment media have made a major issue of the influence of “dark money” contributed to conservative 501(c)(4) organizations for political action.

As The New American reported extensively, the dictator-dominated United Nations was also constantly seeking to stir up unrest and attacks on the unalienable rights of the American people by cynically exploiting the deaths of Trayvon Martin in Florida, Michael Brown in Ferguson, and Eric Garner in New York. From attacking gun rights and the U.S. justice system to demanding that local American police departments adhere to “international standards” and “international law,” the UN boss and hordes of his “human rights” bureaucrats were constantly interfering in U.S. affairs. Even after the police officers involved were cleared of criminal wrongdoing by their peers, the UN did not let up — at least until two New York City police officers were murdered amid the Soros-funded and UN-backed hysteria. Soros, of course, is a big fan of the United Nations, and has funded numerous UN reports, commissions, and programs over the years.

Of course, no manufactured statist protests to “transform America” would be complete without communist involvement and “useful idiots” to do the dirty work. And Soros’ latest antics from Ferguson to New York aimed at promoting Big Government, radical “change,” and nationalized police were no exception. While most of the establishment press never bothered to report it, conservative-leaning websites and sources were quick to point out that the signs held by many of the demonstrators across America were produced and supplied by the Revolutionary Communist Party, USA — as the signs themselves admitted, even including an Internet address for the totalitarian party’s website. The Communist Party USA was also busy hyping and participating in the alleged “movement.”

If the “establishment” media did its job and reported the facts rather than concealing them to advance the cause of “progressivism,” none of this would be a surprise to most Americans. In fact, the “coalitions” and campaigns would probably never have happened to begin with. Instead, the wildly mischaracterized “mainstream media” was too busy frothing about the Koch brothers while justifying and glorifying rioting and looting to inform its dwindling readership about the facts.

And while the Ferguson hysteria from last year appears to have died down for now — like the Soros-funded “Occupy Wall Street” machinations — the key players and financiers are without a doubt already plotting their next pseudo-“grassroots movement” to “fundamentally transform” the United States and its long constitutional tradition of locally controlled police. Until they are properly exposed, Soros and his allies will continue to effectively provide the pressure from above and the pressure from below.

The above article appears in our "Police Under Fire" special report. (Click on the image to download a PDF of the full report.)