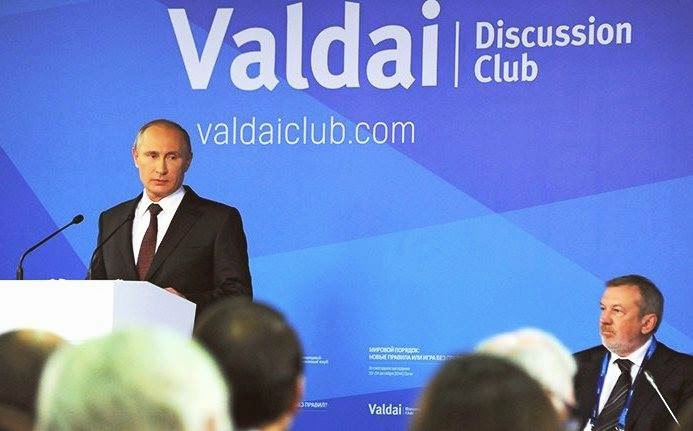 Putin to the Western Elites: World War III Is Inevitable
Posted on November 2, 2014 by Dave Hodges

Told an audience at a recent conference that the U.S. will start WW III and the event is inevitable.

In his strongest speech, ever, directed at the United States, in front of the rest of key members of the Western world, Putindrew a line in the sand with regard to American imperialism.

The following are excerpts of Putin’s speech delivered at the Valdai conference in Sochi, just a few days ago. The speech was directed at Western elites.

…The builders of the New World Order have failed by having built a sand castle…Russia favors a conservative approach to introducing innovations into the social order, but is not opposed to investigating and discussing such innovations, to see if introducing any of them might be justified…

…Russia has no intention of building an empire of their own, but will not go fishing in the murky waters created by America’s ever-expanding “empire of chaos…

…Russia does not wish for the chaos to spread, does not want war, and has no intention of starting one. However, today Russia sees the outbreak of global war as almost inevitable, is prepared for it, and is continuing to prepare for it. Russia does not war, nor does she fear it…

…Russia does not intend to take an active role in thwarting those who are still attempting to construct their New World Order, However, Russia will oppose their efforts if they begin  to impinge on Russia’s key interests. Russia would prefer to stand by and watch them give themselves as many lumps as their poor heads can take. But those who manage to drag Russia into this process, through disregard for her interests, will be taught the true meaning of pain…

…Russia’s will rely not on the elites to set the tone for the future, and these decisions will result from the will of the people…”

Russia Is In War Mode Russian air incursions are the worst that they have been since the height of the cold war between the Soviet Union and the United States.

The RAF has intercepted Russian military aircraft as they neared UK airspace for the second time  in the past week. This incident follows Norwegian interception of two Russian bombers last Wednesday.

The Baltic countries are also witnessing a dramatic increase in Russian military violations of NATO air space in which the Russians appear to be testing their ability to penetrate NATO’s air defenses.

Even the number of times that Japanese fighter jets have been forced to scramble to intercept Russian military aircraft has more than doubled in the last six months, amid  the escalating diplomatic tensions between Japan and Russia.

Russia has even violated American airspace in Alaska with multiple air incursions designed to test and discover the sophistications of  America’s ability to detect and intercept Russian fighters and nuclear bombers. Maybe we can call a “Mulligan” on his presidency.

Putin has warned that “I want to remind you that Russia is one of the most powerful nuclear nations,” Putin said. “This is a reality, not just words.”

The United States would be wise to prepare in kind. Is anyone else concerned that our first and last line of defense is Barack “let’s play nine” Obama?

Video Highlights of the Valdai Speech

Original Russian Text of the Valdai Speech can be found here.